Remember in October, 2017 when Panthers quarterback Cam Newton told reporter Jordan Rodrigue of the Charlotte Observer that “It’s funny to hear a female talk about routes like — it’s funny?” That didn’t go well for Newton, and as it turned out, there were NFL teams that already didn’t think it was funny at all.

In 2017, the 49ers hired Katie Sowers to work with their receivers as an offensive assistant. New head coach Kyle Shanahan brought Sowers with him from the Falcons, where she had worked with the highly talented then-offensive coordinator. She had worked as a scouting intern and seasonal offensive assistant there, and worked her way up to a full-time job under Shanahan in 2018.

“Katie did a real good job for us in Atlanta, she’s done a really good job here,” Shanahan told ESPN’s Katie Barnes last May. “She helps [receivers coach] Mike LaFleur out, just with some rotations and she helps our quality control [coaches] out just with all the stuff they have to do.

“She’s a hard worker, you don’t even notice her because she just goes to work and does what’s asked. Because of that, she’s someone we’d like to keep around. We’re still figuring out exact titles and stuff and what that aspect is, but she’s done a good job for us two years in a row in camp and we’d like to have her help out throughout the year.”

If you wonder why Shanahan likes Sowers as someone who can impart his passing concepts on new receivers, check out this NFL Network footage from Tuesday’s Senior Bowl practice, where Shanahan and his staff are coaching the South team: 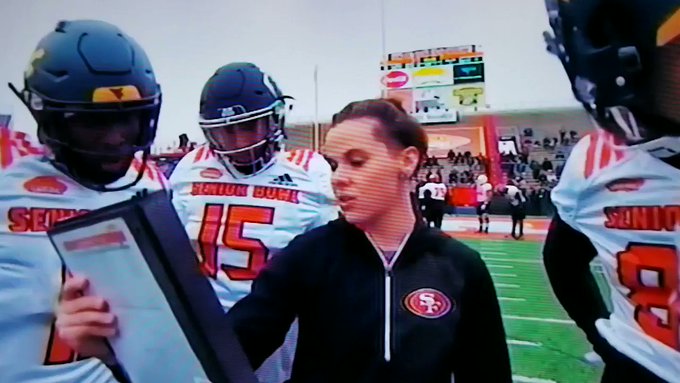 Not sure how hard Cam Newton would laugh at this, but the receivers Sowers is coaching here seem to respect her as she breaks down Shanahan’s routes to the guys who will be running them all week in practice and this weekend in the Senoior Bowl game for the benefit of NFL scouts, coaches, and general managers.

Sowers’ story is interesting beyond this one clip. She’s the second female assistant coach in NFL history, following in the footsteps of Kathryn Smith of the Bills. She played quarterback for the Kansas City Titans of the Women’s Football Alliance, and while she has been turned down for at least one coaching job due to her sexual orientation, when she came out in May, 2018, she became the NFL’s first openly gay coach. A trailblazer in more ways than one.

None of this would matter if Katie Sowers couldn’t do her job at a standard anybody else would be held to. But if Kyle Shanahan–one of the smartest and most exacting coaches in the NFL–trusts her with his 49ers and Senior Bowl receivers–that should be good enough for anybody.

Including players who have believed that hearing “a female talk about routes” was funny.

Washington-Browns will be first NFL game with female coaches on both sidelines, female official on field

This Football League Was Built For Girls Who Love To Hit

National treasure Betty White, 97, is ready for some football in new NFL promo