A star placekicker for a Michigan high school football team was mocked on social media for her race, though the troubling Instagram post has since been removed.

Ashton Brooks is a senior placekicker for the Dow football team in Midland, Mich. The Chargers have surged to an 8-1 start thanks in no small part to Brooks’ success as a kicker; she entered Friday’s crosstown rivalry game with Midland 29-for-31 on extra points, the best rate in the Saginaw Valley League.

Also a star soccer player, she splits the week between football and club soccer practices, a jumble that is common among a number of female kickers across the nation.

Unlike some of those kickers, Brooks is talented enough at soccer to have earned a partial college scholarship to Northwood University, where she will also receive a partial academic scholarship. Oh, and she apparently has a heck of a singing voice, to boot (not to mention a spot on the Dow basketball team).

Yet, because Brooks is African-American, she has already faced discrimination on social media. New York Daily News justice writer Shaun King tweeted a screen captured image from an Instagram post that showed a white female teenager hugging a counterpart in a full gorilla suit, with the caption in the post identifying the gorilla as Brooks. The post has since been removed, and the account that posted it has since been deleted from Instagram.

You can see King’s Tweet, which includes the image directly below: 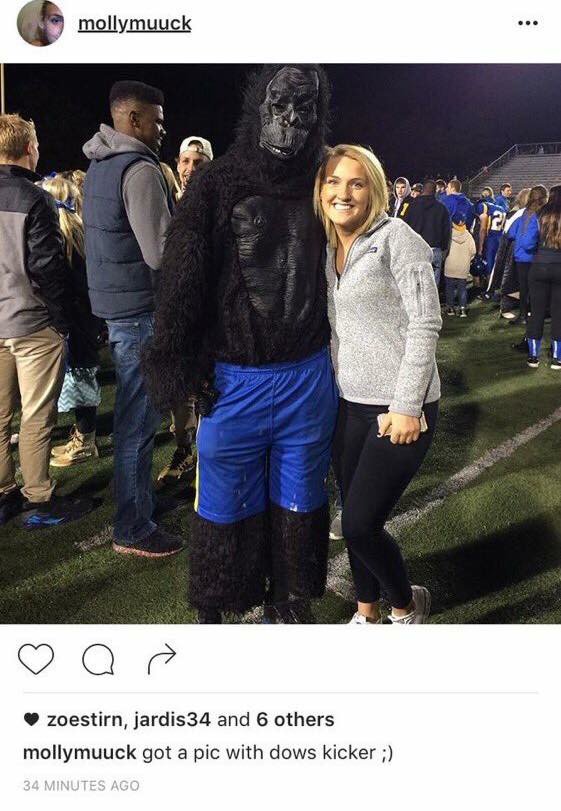 “The Board, Superintendent and High School Administrators have thoroughly investigated this incident,” the statement continued. “The girl who posted the photo and caption is a former MPS student. She last attended MPS in the 2014-15 school year and now college age. We are equally offended and upset that our Schools and Community have been connected to her comments in this matter. The comments made do not reflect the beliefs of our District or Schools in any way.”

“During the investigation it was evident that the student in the costume was surprised to learn that this post had been made. He was shocked that some people thought that he was complicit in staging the photo. We believe that based on what we have learned, he was unaware of the post being made and specifically did not know about the girl’s comments until we addressed it with him” …

“Midland Public Schools will continue to track this information. We will condemn this type of racism and misuse of social media within our Schools, District and Community.”

As for Brooks, she’s clearly more than just the female kicker; she’s a vital part of the team, as both she and Dow coach Jason Watkins attested to the Midland Daily News.

“From what I observe, she fits right in,” he said. “I love that when we go on a bus ride, Ashton is not sitting up (front) with the coaches; Ashton is sitting back with the team. She’s not Ashton, the girl kicker. She’s Ashton, a member of the team.”

“That’s what I wanted from the beginning of the season — to be just another one of the guys, and I feel like that’s how I’ve fit in with the team so far,” Brooks said.