Stephanie Balochko has found a way to accomplish her goals.

Ever since Balochko was a little girl, she has always had a love and passion for the game of football.

Balochko is the defensive coordinator for the Pittsburgh Passion, which is part of the Women’s Football Alliance

She also serves as a full-time firefighter and paramedic.

For the next two weeks, however, Balochko’s main role will be as the defensive coordinator of the U.S. Women’s National Team for the 2017 IFAF Women’s World Championship.

She’ll help lead a roster of 44 women who are heading to British Columbia with one goal: capturing a gold medal for the third consecutive time.

Balochko’s experience as a coach is shaped greatly by the opportunity she enjoyed last summer with the Pittsburg Steelers. 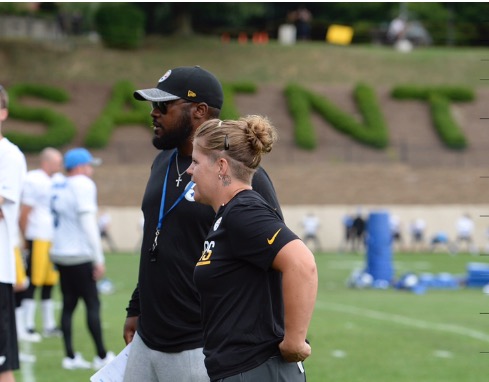 She demonstrated that she knew the ins and outs of the game, earning the respect of the players in the process.

Balochko learned a great deal from her time at training camp, but said her biggest takeaway was how similar football in the NFL is to version of the sport that she’s played and coached.

“Women’s football is 99% the same as their football, we are just learning and growing with it, we are there at the ultimate level,” she said.

As Balochko and the U.S. Women’s National Team get ready to compete in the 2017 IFAF Women’s World Championship June 24-30, Balochko downplayed the significance of her role and experience and instead, shifted the attention back toward the players on the field.

“It’s about the players and what they have done to get to this point,” she said.

The U.S. National team will be competing against five other countries; Finland, Great Britain, Mexico, Canada and Australia.

Balochko and the rest of the U.S. team arrived in Tacoma, Wash. on June 16, barely one week before the games begin.

Even though the team will have limited time to practice, Balochko is confident in her defense—and excited for the challenge.

“It’s a chess match,” she said, “I like when an offense tries to beat me and I like coming up with a plan to beat them.”

The U.S. will face Mexico in their first match-up on Monday, June 24.

Sarah Fuller, With a Kickoff, Is the First Woman to Play Football in a Power 5 Game

Washington-Browns will be first NFL game with female coaches on both sidelines, female official on field

This Football League Was Built For Girls Who Love To Hit

National treasure Betty White, 97, is ready for some football in new NFL promo