It’s a blustery Saturday morning at a park in Burtonsville, Maryland when two coed flag football teams — the Redzone Assassins and Ballers Gon’ Ball — face off. The Ballers have possession on first and goal, and everyone on the field knows the quarterback is looking to pass to one of three female receivers. It’s an integral part of the game. If one of the women scores, the touchdown is worth nine points instead of the standard six.

To answer that question, we examined flag football in the Washington area as another aspect of evolving gender dynamics. Many flag football leagues around the country award more points when women score touchdowns. League owners say gendered rules are an incentive for coed teams to utilize their female players more often. Lamaar Thomas, the Ballers captain, says that using his talented female athletes as often as possible is a key part of his strategy.

The strategy has worked well for the Ballers. They recently won a national title, which secured the team a spot in the Flag Football World Championship Tournament in Arlington, Texas, which takes place Memorial Day weekend. Several Washington-area teams will be joining them to compete for $60,000 in prize money. 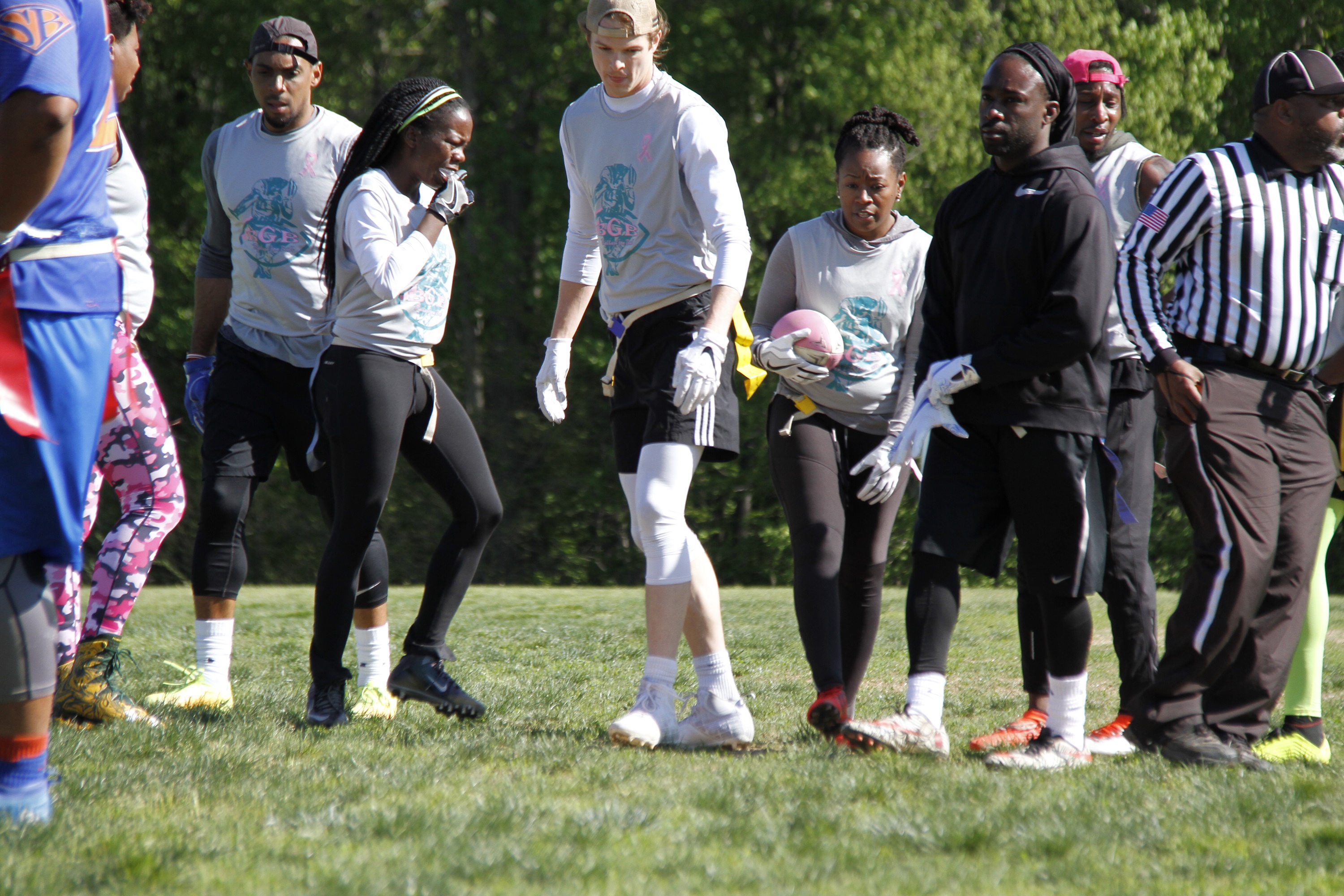 Thomas is taking five female players with him. A strong show of feminine force will allow the team to run women-led plays like one they call “Hide the Mom.” The play includes every available female teammate and literally involves Thomas’s mother, who plays on the team.

“Everybody kind of gets excited about running this play. I don’t know if it’s more so they like the trickery of the play, or they want my mom to score. It might be a combination of the two,” he said.

“Hide the Mom” highlights another gender-based rule applied in some flag football leagues. This rule requires a woman to be the operative player every three downs. Some leagues also require teams to have a specific number of female players on a team and on the field during play. The latter rule is often implemented by other recreational sports leagues, like softball.

There are flag football leagues in the Washington region that don’t have gendered rules. Brian Hotchkiss is commissioner of the D.C. Gay Flag Football League. He says they believe gendered rules send the wrong messages.

“That female players aren’t capable of playing at the same level as men, or that without policing or incentivizing, male players would not treat their [female] teammates as worthy equals,” Hotchkiss said.

Gender-based rules in flag football are symptoms of a larger societal problem, Hotchkiss says. Women — especially female athletes — are often deemed unequal to men in male-dominated subcultures like sports. While some feel that gendered rules help level the playing field, Hotchkiss says they don’t do anything to solve the overarching issue of inequality.

“To ensure that women touch the ball more often, or to incentivize their scoring, are Band-Aids on a much larger problem of men not seeing women as equals,” Hotchkiss said. 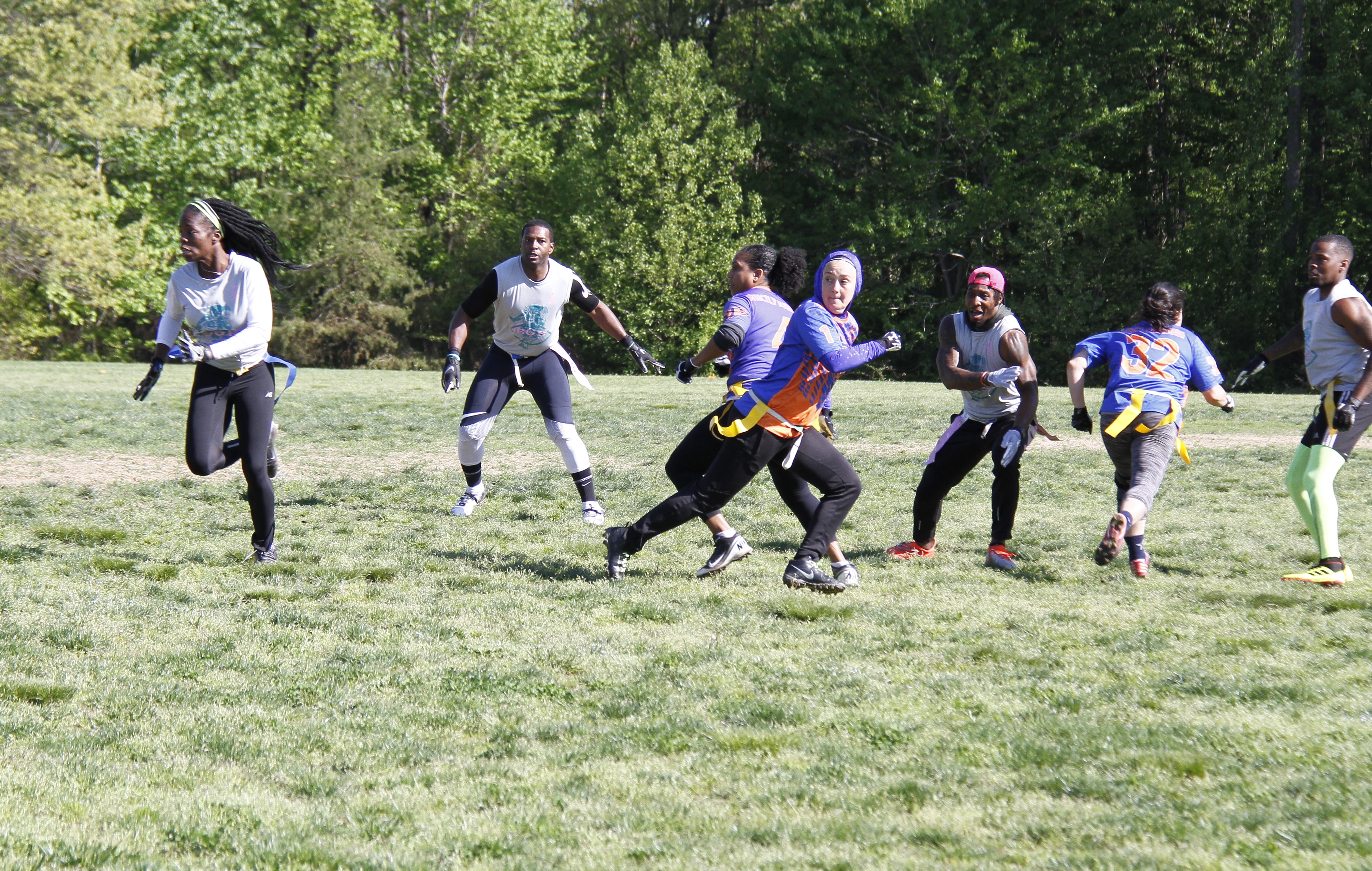 Even with the gender-based rules, Lamaar Thomas says female players on other teams still get left out. Keena Brooks says that doesn’t happen to her and the other ladies on the Ballers because Thomas respects and appreciates his female teammates.

“Football is a male-dominated sport. But to empower women to be successful and active and active game players. It’s good. He gives us motivation,” Brooks said.

Ballers player Asherah El agrees. She says that playing on Thomas’s team has taught her to be quick and alert in what is often organized chaos. 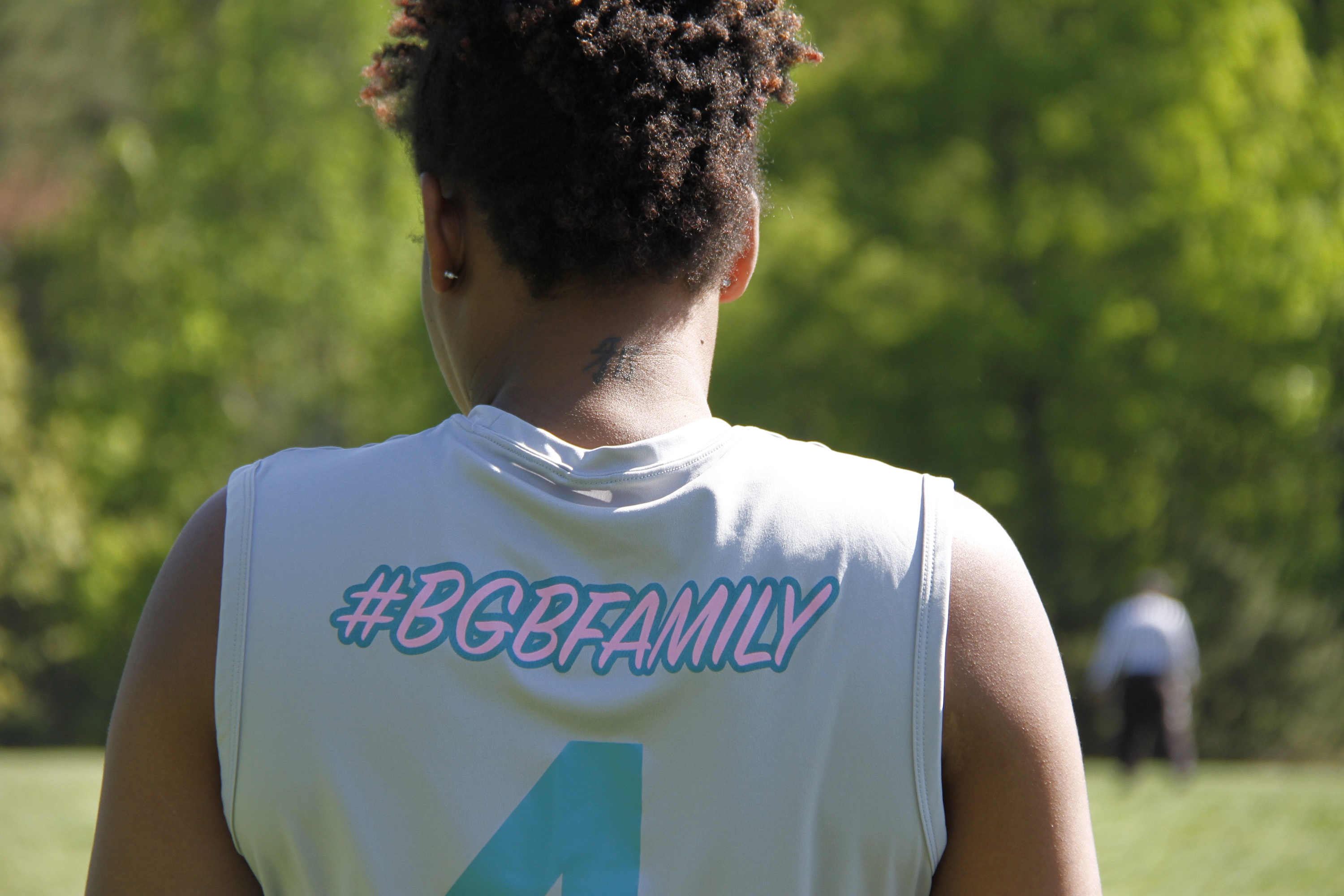 Dimes got her nickname “Megatron” for her speed and catching skills. It was the same nickname given to former NFL wide receiver Calvin Johnson.Esther Ciammachilli / WAMU

Some players on the team have nicknames that correspond with their talents on the field.

“I actually got the name ‘Megatron’ from the women’s team I play on,” said Tamara Dimes, recalling the day her female teammates christened her with the moniker. “I was at a practice, and I was running a route and the quarterback threw the ball behind me and I reached back and scooped it. Basically, you throw the ball, I’m coming down with it most of the time.”

Dimes’s nickname did not come from the villainous leader of the Decepticons, but from former NFL wide receiver Calvin Johnson. “Megatron” was given to Johnson by a teammate during his rookie season on account of his speed and catching ability. Dimes’s teammates saw similar talent in her.

Ballers player Keena Brooks said she doesn’t see gendered rules as a hindrance to equality. Instead, she said, they put women at the forefront of coed flag football and are signs that views on male and female athletes are shifting toward a more equal playing field.

Students of the game: Women moving in, moving up into NFL scouting jobs