A female football player set to star in a Super Bowl advert this Sunday has said she wants to be the first woman to play in the NFL.

Former homecoming queen Toni Harris, 22, is a defensive back for the East Los Angeles College Huskies and is considering four scholarship offers to continue her academic and football career.

And the 5 foot 6, 164 pound player now wants to be the first woman to play in the NFL after becoming one of the first female non-kickers on a college football roster, according to ESPN.

Harris, who may be the first to receive a scholarship offer, will star in Toyota’s Super Bowl commercial this Sunday where she declares: ‘I’ve never been a big fan of assumptions.’

She told USA Today: ‘I plan to be the first female NFL player. Drafted or undrafted, as long as I get there, with God’s will.’ 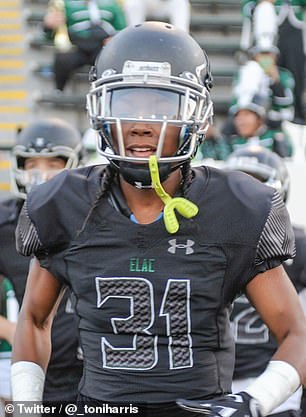 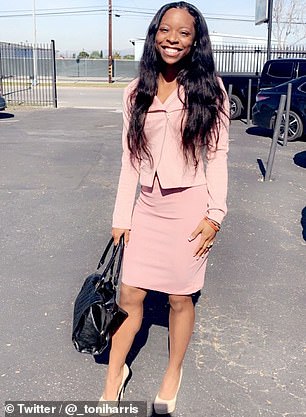 Toni Harris, pictured, is currently a defensive back for the East Los Angeles College Huskies and is considering four scholarship offers. She wants to be the first woman to play in the NFL.

Toni, originally from Detroit, was in foster car from the age of four until she was adopted at nine. She was diagnosed with stage one Ovarian cancer when she was 18.

She told CBS: ‘I feel like anything that comes my way I can overcome it and that’s probably why I’ve overcome so much stuff in my life.’

Sophomore Toni, who was forced off teams because she was a girl, added: ‘I first developed an interest in football when I was about four – between four and six years old. People around me – they weren’t too fond of me playing football. They said that I could get hurt a lot easier playing with guys.

‘I love to prove people wrong. I was kicked off a team when I was younger because I was a girl. But once I got older and into high school, I mean, it still was hard but I just tried to pave my way through no matter what anybody said. It’s my dream and I’m gonna protect it at any cost.

‘Being a role model, it’s an honor, but it’s also a privilege because not every day everybody can stand up and be a role model for other people. And it’s kind of hard. It’s a lot of pressure, but I mean, I’m just paving the way for the next little girl that’s gonna come along and be a role model as well.’

Harris then turns to the camera and says with a smile: ‘But I’ve never been a big fan of assumptions.’